Another comedy piece I’ve managed to get published! See “Lessons from My First Year of Gardening” on Little Old Lady Comedy. If you were worried, I think it’s unlikely that my neighbor is actually going to murder me. Although that’s mostly because she’s a bit frail for murdering, and if she had more ability to lift a weapon things could be different.

That’s what I’ve got—I did the math. Want to see how? Check out “The Mirror Rarely Lies”, a new piece I wrote that was just published on The Haven. It’s all about my left shoulder, and a little about my calves, and a very tiny amount about my armpit. I hope you enjoy it?

Just wanted to share a piece I had published on Points in Case last week: “Escape Room Mission Report for Susan’s 16th Birthday Party.” I’m quite pleased with how it came out; there’s plenty of snark and I think it will ring true for a fair number of people.

This site is slowly coming back to life.

I’ve got some early possibilities of good things happening, writing-wise, and some bigger hopes, and I’ll be irregularly using this space for updates and maybe other interesting things.

The first good thing: I’ve got a full month! Yep, it’s me month at TrueHumor.com. That means I’ve got three stories that are being featured throughout March:

Some of my favorite experiences in writing the book were learning about truly independent citizen science projects. Don’t get me wrong: I’m not denigrating the projects that are sponsored by institutions. Good work is good work, after all, and as a practical matter, institutions are an effective way to ensure that things get done on a continuing basis.

It can be tough to make things happen and keep them happening without an institutional framework. In writing the book, I was really impressed by the projects that developed independently, just because some individual was interested in something and wanted to learn more.

Ken Strothkamp’s research into the spotted tussock moth is one of those projects. It started when his daughter found a moth he couldn’t identify. He turned to the Butterflies and Moths of North America website for assistance; there he learned not only what the moth was, but also that it hadn’t been documented in their county before. They were able to see the difference that their discovery made in the species’ range maps, and from there they were hooked.

Ken is a researcher at Lewis & Clark College in Portland Oregon, but he knew nothing about butterflies or moths when he started investigating. In particular, he was curious about regional variations in coloring in the spotted tussock moth’s caterpillar. In eastern North America and along the California coast, the caterpillar is yellow and black, but in the interior west it’s orange and black. The Pacific Northwest population has significant variation in coloration.

While Ken has formal scientific training and access to a lab, he also has more than 50 citizen contributors who share observations, photos, and specimens.  He produces an annual report for those contributors, and he gave me permission to share some of the most recent results with you.

The project has made progress in identifying several of the pigments that make up the various colors of the caterpillar—zeaxanthin, a yellow pigment that it gets from its food; and eumelanin, a black pigment it makes itself (also the pigment which is found in black human hair). An orange pigment in the caterpillar remains unidentified, but it may be the same one found in red hair in humans.

Ken has theorized that the Pacific Northwest population is a hybrid of the western interior and coastal California forms made possible when the climate warmed after the last ice age and the species migrated north. He has demonstrated the possibility of this theory by hybridizing the two variants in the lab. These hybrids showed the same color variations as wild spotted tussock moths in the Pacific Northwest.

The research has raised other questions. These include:

For more details and to contribute to the project, contact Ken at kenstrothkamp@lclark.edu.

The big excitement of my past couple of weeks is this:

It took a surprising amount of wrangling with UPS for it to actually get to me, but yes, that is my book, and it’s published and released and ready for reading.

There’s even a press release, which is pretty exciting. You can, of course, order your own copy. Local libraries will hopefully carry it as well, although that kind of decision happens on the local level. (So if you’d like to check it out of your library, you may need to suggest they order it first; most libraries have some procedure for patrons to recommend books for them to carry).

But enough of the shameless self-promotion, and a bit about the projects featured in the book. One of the things about book publishing is that it’s got a pretty long lead time. So watch this site for updates and news from the roughly 100 citizen science projects included in the book.

A bit of non-job-related, non-citizen science productivity that I finished this week: This is my entry for the Eco-Comedy Video Competition, sponsored by the Sierra Club and American University’s Center for Environmental Filmmaking.

This was a bit of an unusual project for me… it coincided with a big life change [see: new job] so my work on it was a bit fragmented. On the happier side, it’s the first time I’ve done any kind of mouth-animation, so it’s nice to be able to learn new techniques.

Where do different animals live? That doesn’t seem like a terribly complicated question. After all, any field guide to anything will have range maps for whatever the guide is about.

In researching my book, I learned that those range maps are… well… only OK. In reality, they serve as general guidelines than absolute truth.

Citizen science is pretty well-suited to help improve them. Professional scientists, after all, can’t be everywhere to check if a given species has shown up in a given place. Amateurs can help to fill in the gaps.

One of the most celebrated examples of this was the nine-spotted ladybug. It’s the state insect of New York, but it hadn’t been seen in the state for almost 30 years and was believed to be extinct in the state. Until, of course, it was found again by a participant in the Lost Ladybug Project in 2011. (This was the second notable discovery of a nine-spotted ladybug through the project; a preteen brother and sister found one in Virginia in 2006, which was the first one found in the eastern US in 14 years.)

Many projects aim simply to get a grasp of what might live where. The Minnesota Odonata Survey Project, for example, is trying to rectify the fact that there are counties without any records of dragonflies or damselflies, even though those counties certainly have odonates in them. As project leader Kurt Mead told me, the state is sort of a crossroads for dragonflies and damselflies, and species from all parts of the continent have ranges that overlap there.

Camera phones are a great boon to this kind of work; they let amateurs document their finds, even if they don’t know for certain what they are, so that experts can make identifications and investigate further if needed.

I’m slowly populating the links section in the sidebar with citizen science projects. This week’s additions are this type of project that aim (at least in part) to help improve range maps of various species, including:

Butterflies and Moths of North America

Adam Stevens argues for more science in citizen science. Worth a look, although as I’ve written, I see value in the non-research elements of citizen science as well.

Curiosity, for example, is awesome, and citizen science can help pique it. Also, helping kids develop the skills they will need to ultimately enter a scientific career.

Cornell Lab of Ornithology highlights some of its citizen science projects, with particular focus on their use in education.

Also funny: Weird Al Yankovic’s set-up for teaching his daughter the piano. If I ever teach music, I’m going to replicate this.

So, Thursday I started my new job. And Thursday night, I’m embarrassed to admit, I had a bit of a panic attack.

It really wasn’t serious, I don’t think. I was just in a situation where all kinds of thoughts were bubbling up and I didn’t have much way to diffuse them. I still don’t (while I started Thursday, the past couple days have been training so I’m not really doing anything until Monday, and most of my normal coping mechanisms aren’t really available to me today.) So to try to exorcise them, I’m going to write them out. Hopefully they’ll look as silly on screen as I think they are.

It’s been about 9 months since I’ve had a standard work-for-someone-else job. So is the day-to-day grind something I’m going to be okay going back to?

Also, this job isn’t a traditional job-job; I’ll be working remotely without a lot of direct human contact. Is that going to work out?

Am I going to be okay spending as much time in my apartment looking at my computer as I’m going to be spending?

This one’s a bit nebulous. My last job… well, it put a lot of effort into breaking me. I spent most of my time arguing over things that were really really obvious and losing, because the arguments were actually about enforcing status and I was on the bottom. That put me into a situation of comfortable victimhood; there was an equilibrium, and even though it was terrible I was getting through. What if I try to recreate that terrible equilibrium because it’s what I know? (I warned you these were irrational.)

The terms of this job — salary, benefits, etc. — look good. But what if I’m wrong or missing something and in fact they’re terrible?

Or, what if I’m selling out and I get comfortable in this position and lose the motivation to create anything else that I love creating?

It still looks really stupid. I know that if this job doesn’t work out, the right reaction is to get another one, and the only way to create is to, you know, create. Until I get the chance to actually experience how situation is working out, though, I guess the fear will have to tumble around for a little while longer. 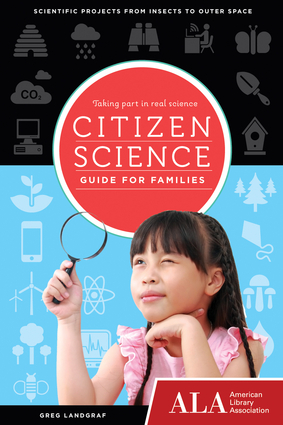 New (to me) Citizen Science Projects